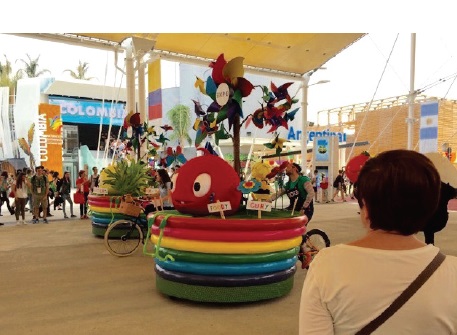 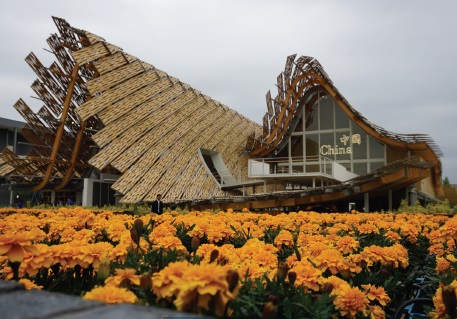 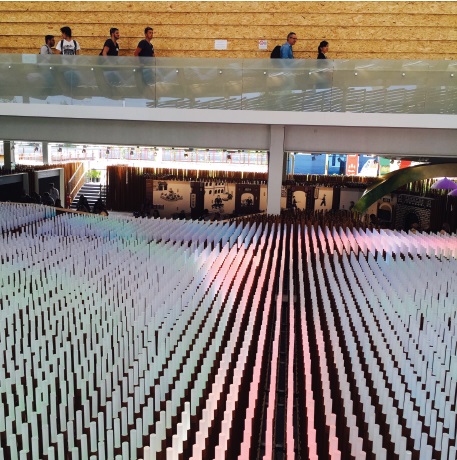 “Wheat Field of Hope” inside the China pavilion     AH 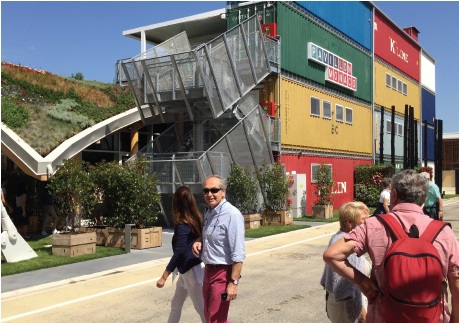 Shipping containers at the core of the Monaco pavilion,
a stark example of the expo’s insistence on reusable,
recyclable pavilion structures     AH 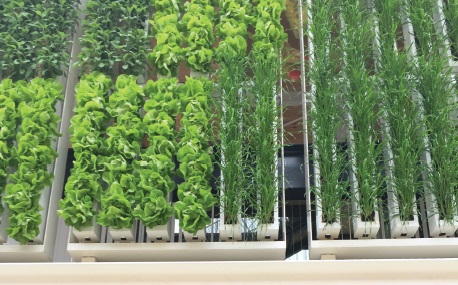 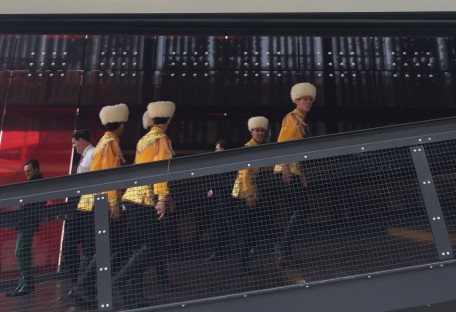 Vegetables growing on the side of the US pavilion     SB 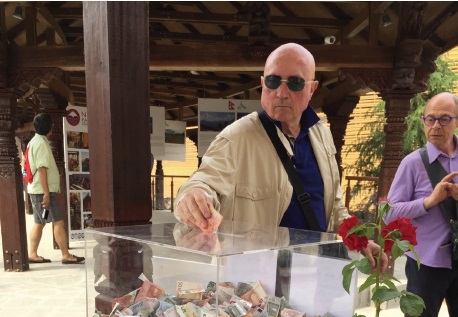 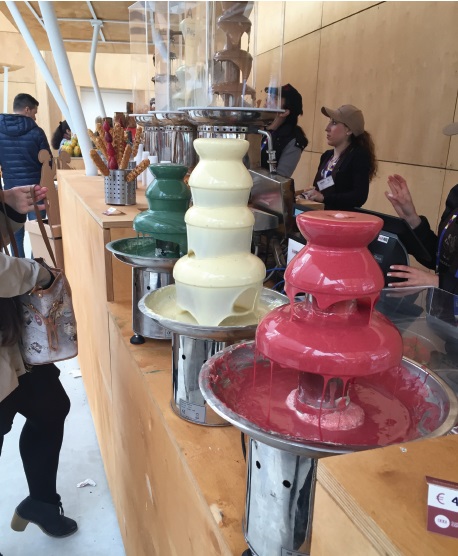 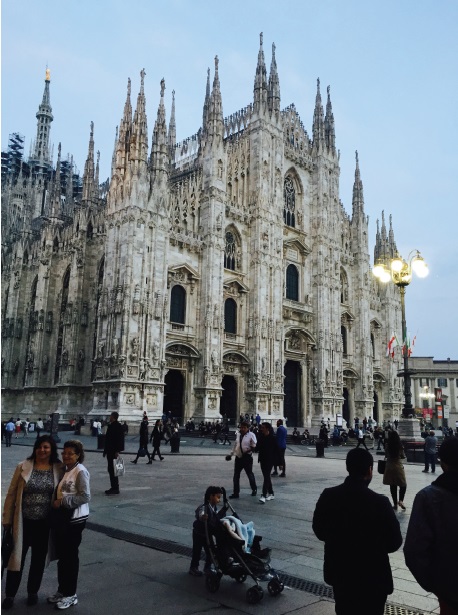 The Duomo and its plaza: the heart of Milan     SB 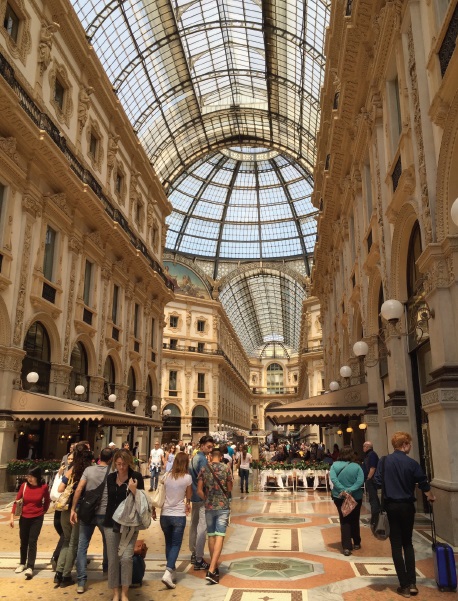 Inside the great Galleria, accessible from the Duomo plaza     AH

Eighty-sixed by the Expo by Alfred Heller

It was my 20th world’s fair (see the list below*). No matter. I was 86 years old, and that made all the difference. I walked down the mile-long central corridor, called the Decumano, my right toe hurting from a blister, my back in some pain, my energy, usually high at an expo, flagging in the muggy heat of a spring day. The expo provided canvas shading at close intervals along the avenue, but places to sit were in short supply (in later weeks some were added). My son-in-law Lee Anderson scouted for the occasional shaded ledge or bench and if he found a vacant spot, sat in it and then yielded it to me when I shuffled in. Meanwhile, phalanxes of schoolchildren surged past and would not allow anyone to cross their paths. And at midday, tunes blared forth at the center of the throughway, and the expo’s mascot, an apple named Foodie, along with other costumed figures representing a large family of fruits and vegetables, pranced to and fro, hardly a substitute for the Cirque du Soleil stilted marchers at Expo 2008 in Zaragoza. Well, the Cirque was coming to Milano. Maybe they’d take over.

Lee insisted that when he looked from one end to the other of the Decumano he could see the curvature of the earth. It was indeed a long walk, considering all the side trips one wanted to take—to pavilions, exhibits, restaurants, gardens, restrooms, outdoor theaters, two-three-four deep both north and south of the avenue. A short boulevard called Cardo crossed the Decumano, culminating in the Tree of Life, the expo’s dominating symbol. After dark the tree was the center of a light-and-sound show in the middle of a pond: pulsing fountains and changing light patterns and colors in the tree, all closely timed to music, Las Vegas-style.

The expo’s Official Catalogue, strangely available only in a single bookstore/gift shop adjacent to the US Pavilion, explained that the tree was “inspired by the star design of the paving designed by Michelangelo for the square of the Capitol in Rome” and “best represented [the Italian Pavilion’s] theme Nursery Garden. Its roots penetrate deep into the strength and variety of Italian centers of excellence, which the Tree, in a fluid, symbolic gesture, projects onto the sky to redistribute around the whole planet.” And now you know why the official catalogue weighs more that three pounds.

Expo Milano, with the food theme “Feeding the Planet: Energy for Life,” sprouted forth in an industrializing area on the edge of the fertile Po Valley, near Milan. It claimed some 140 participating nations and anticipated an attendance of 20 million. It’s difficult to verify such numbers at a modern expo­—unless you are possessed of an insider’s knowledge of how the counting is done. For example, employees of the various pavilions and entities, who pour in by the hundreds and thousands, can hardly be counted every day as new attendees or paying attendees. But are they? And as for security personnel, who is going to ask an unsmiling guard armed with a Tommy gun (there are many such men and women patrolling the periphery of the grounds)—much less the police-types who swarm around the entrance gates—how they got through the turnstiles?

The world’s fair’s international, commercial, and thematic participants could be found in many guises across the fair’s 250 acres, depending largely on their levels of commitment and their political skills in dealing with each other and with the organizers. Major nations put up their own pavilions and exhibits. Others were slotted into thematic “clusters”: Arid Zones; Bio-Mediterranian; Cocoa and Chocolate; Coffee; Cereals and Tubers; Fruits and Legumes; Islands, Sea, and Food; Rice; and Spices.

Using small tasting booths and simple displays, many small nations managed to make themselves, their agriculture and food production techniques noticed. However, some nations were not easily found, though they were listed as being present. On the other hand, commercial interests could dominate a cluster, or a neighboring cluster. The Belgian pavilion was next door to the chocolate cluster, for example, and the smell of Belgian chocolate—amply available in both places—seemed to hover over both.

A further distraction was a variety of theme pavilions spread across the grounds. Pavilion Zero presented a series of films on giant screens. You could walk through this lofty space, starting with a convincing, crude and rude film showing how prehistoric men and women acquired and consumed other animals, through films and animation (somehow projected inside narrow walls) about growing and raising animals and plants, through films touching on modern farming and agricultural techniques.

On the northwestern end of the site, Pavilion Zero was hard to find, but screenings by almost every exhibitor at the expo followed the thematic pattern set forth there. Plus participants put on entertainments, offered examples of regional cooking and gave vent to sponsors and their products. First, though, came the large-screen message: with our climate, skills and crops, our small (large) nation can feed the world. “Too many screenings,” mumbled a granddaughter of mine who attended the expo and is a film-maker herself. The modern expo has indeed substituted movies of beautifully tended rows of crops for displays of the latest invention (the cotton gin, television).

Mid-afternoons we typically hailed a ride back into the city, figuring we could explore a bit around the Duomo (cathedral) plaza, eat a quiet dinner at any of the informal bistros in the area, and call it a day. But more often than not, as the day cooled down the lure of the expo and its many unexplored features drew us right back. One morning, however, we walked some of the narrow, pedestrian-only streets, and found ourselves in a large park. At the edge of the park was a grandiose, multistory building in the Fascist/deco mode of the Mussolini era: his security headquarters, with an heroic frieze carved on high, and a splendid restaurant on the ground floor. Good food, pleasant vibes I assure you.

Another day we managed to get tickets to see Leonardo da Vinci’s Last Supper, also near the center of Milan. Each small group that pulses into the convent where it is located has exactly 15 minutes to see this grand Renaissance mural close-up or at a distance. From either perspective it is exciting!

It was, indeed, the ultimate meal in a town dedicated this summer to Food and Foodies.

Inside the great Galleria, accessible from the Duomo plaza     AH

The Duomo and its plaza: the heart of Milan     SB

Vegetables growing on the side of the US pavilion     SB

Shipping containers at the core of the Monaco pavilion, a stark example of the expo’s insistence on reusable, recyclable pavilion structures AH

“Wheat Field of Hope” inside the China pavilion AH